New York The Book of Mormon

The Book of Mormon 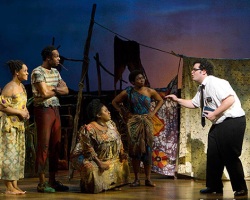 The Book of Mormon has been enjoying a record breaking run on Broadway. Produced and written by the creators of South Park and Avenue Q, it has been thrilling critics and audiences and fully deserves a five star rating. If you’re into comedy and humourous theatric productions, this is the one to see.

The Book of Mormon is a comedy musical satirising the Mormon church (and other modern day regions), as well as taking a few shots at stage musicals. The South Park duo Trey Parker and Matt Stone have always held a soft spot for musicals; the South Park feature film was developed into a musical and many of the show’s episodes feature songs written and performed by Parker. The pair met Robert Lopez, the creator of Avenue Q, and found that he too shared their passion for combining comedy and music. They quickly decided that they wanted to write a musical about Joseph Smith, the founder of the Church of Latter Day Saints. Stone and Parker had previously devoted a South Park episode to lampooning Smith and, with Lopez, the trio spent the next few years writing and composing the Book of Mormon.

The play follows two young Mormons, Price and Cunnigham, as they sent away from Utah to Uganda in order to spread the word of the Mormon religion. However, the pair find that Africa is very different to America and that its inhabitants have more pressing concerns than hearing about the word of Christ. Robbed and captured by a local warlord, they quickly discover that they are out of their depth and struggle to accomplish their duties as missionaries.

Who should see the Book of Mormon?

The play definitely is not one for the easily offended as much of the humour is crude and quite foul-mouthed; as are many of the musical numbers. In one particularly memorable scene the villagers share their own philosophy with the missionaries with the song Hasa Diga Eebowai. To put it lightly, it is a smutty and unique parody on the Lion King’s Hakuna Matata, and it is the moment in the play that the protagonists realise that they are from a very different world than the villagers. However, blasphemy and humour aside, the play also shows enormous warmth. Price’s crisis of faith and the difficulties he has faced is expressed in the show-stopping number I Believe. It is a sincere and heart-felt look at faith and religion, while still managing to throw in a few jibes at the same time.

The play recently won a number of prestigious Tony awards. Lead actors Andrew Rannells and Josh Gad were nominated for their performances of Price and Cunningham, and Nikki M. James won the Tony for featured actress for her performance as Nabulungi, a villager that the missionaries encounter. The play also scooped up Tonys for outstanding play, music and lyrics.

Where is the show running?

The Book of Mormon is currently playing at the Eugene O’Neill Theatre on Broadway, but tickets are hard to come by. Cheaper tickets are usually available for weekday showings, although they still have high demand so early booking is essential. However, the play is due to begin a national tour and there are plans for a West End production. These future shows may be easier to buy tickets for when the dates are announced.

Review of the Book of Mormon?

The Book of Mormon is a smart and witty play that has some of the funniest and most accomplished musical numbers for years. It is easy to see why it has been such a huge hit on Broadway, and it is anticipated that it will enjoy a long theatrical run.

There are plenty of other spectacular shows to see on Broadway. Read our reviews of Jersey Boys, Wicked, The Lion King, Mary Poppins and Ghost to name a few.