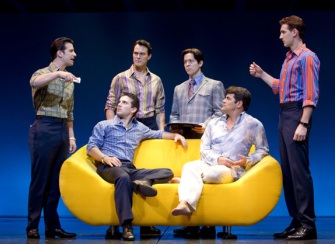 A rip-roaring ride through rock ‘n’ roll’s 1960s heyday, this gritty musical charts the rise of one of the decade’s most successful groups, the Four Seasons.

A part-biographical, jukebox musical, Jersey Boys gets to the heart of the blue-collar roots of this New Jersey band – lead by the inimitable Frankie Valli – who had memorable hits with songs such as Sherry, Big Girls Don’t Cry, December 1963 (Oh, What A Night) and Walk Like a Man. Never as successful as some of their contemporaries – critically at least – the Four Seasons nevertheless racked up a string of hits in the course of two decades, selling 175m records across the globe. On entry to the Vocal Group Hall of Fame in 1999, they were recognised as the biggest rock ‘n’ roll group in the world prior to the Beatles. The instantly recognisable hits that make up this musical is a reminder of the group’s phenomenal output.

Jersey Boys musical vs the band

Told from the point of view of all four of the original members of the band – Valli, Bob Gaudio, Tommy DeVito and Nick Massi – the musical delves into the group’s fascinating and hard-edged background. Growing up in poor neighbourhoods of New Jersey, some of the members dabbled with crime, spending short sprees in jail before hitting the big time. The group’s music was a product of their background, appealing to “the factory workers and the truck drivers, the guy flipping burgers, and the pretty girl with rings under her eyes in the diner” as it says in the script.

There is connections to the Mob, too, which meant that there was always a dangerous bad-boy edge to the Four Seasons, despite the sweetness of their harmonies and their boyish good looks. The musical follows the relationship between the four young men as they deal with the pressures of life on the road, the thrills and spills of stardom and the struggle to escape from the past. It’s a tender and heartwarming portrayal of friendship, loyalty and resilience in the face of failure. When the group finally finds the success the four members have worked so hard to achieve, there is a poignant sense of the fleeting nature of fame and the double-edged sword of exceptional talent.

When was Jersey Boys launched at Broadway?

The show are very popular among women and those who enjoy hearing a great musical.

Where to buy tickets to Jersey Boys in New York

To book cheap tickets for Jersey Boys, check out the weeknight performances and pre-buy your tickets online.

Other related theatre shows in NY

There are plenty of other spectacular shows to see on Broadway. Read our reviews about similar musicals, such as Memphis, Lion King, Wicked and Mary Poppins to name a few.