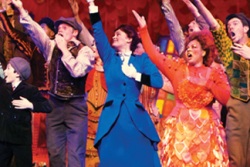 A classic and heartwarming family comedy, telling the fantastical story of a nanny who flies into the lives of the Bank family on her magical umbrella.

Synopsis and comparison between Broadway and West End

The West End production of Mary Poppins opened its doors at the Bristol Hippodrome in December 2004, with the Broadway version following two years later in November 2006. Both productions were staged by near-identical creative teams, preserving much of the original mise en scene and many of the special effects. Cameron Mackintosh, the world renowned British theatrical producer, was the driving force behind bringing Mary Poppins to life on the West End stage. He acquired both the rights to adapt the original Mary Poppins books by Pamela Travers into a stage play, plus in 2001 the collaboration of Disney Theatrical, effectively allowing his team to use the songs from the Disney adaption.

What is the musical about?

The magic starts at number 17 Cherry Tree Lane, the residence of the Banks family. George and Winifred Banks have two naughty children Jane and Michael, who have driven away every other nanny they’ve ever had. The parents are at their wits’ end, that is until Mary Poppins shows up. Not exactly what Mr. Banks expected, this nonsensical nanny teaches them how to laugh and enjoy life, having just as much effect on the parents as she does the children. With a host of friendly characters and many a song along the way, Mary Poppins brightens up the lives of this bored Edwardian family, bringing the gift of happiness into their home. A heartwarming story, the kind that touches you for years to come.

Famous Actors in the current production

The most famous portrayals of Mary Poppins and her friend Bert are undoubtedly those of Julie Andrews and Dick Van Dyke in the Disney film adaption. Julie Andrews won the Academy Award for Best actress in 1964, and the film won numerous Oscars, receiving a total of 13 nominations. The stage adaption has also had its fair share of critical acclaim: Gavin Lee, the original actor to play Bert who returned later to the role, has been nominated for numerous theatrical awards including the prestigious Tony Award for Best Leading Actor in a Musical in 2007. His counterpart Laura Michelle Kelly won the 2005 Olivier Award for Best Actress in a Musical for her role as Mary.

Mary Poppins lovers will adore seeing all their favourite parts of the film live on stage, plus some new and exciting scenes that have been added from the book. Look out for walking statues and ladders rising to the stars, and of course some catching new songs.

As for famous quotes from the show, all of them can be sung at the top of your lungs! ŌĆ£A Spoonful of Sugar,ŌĆØ ŌĆ£Chim Chim Cher-eeŌĆØ, ŌĆ£SupercalifragilisticexpialidociousŌĆØ… none of the best music has been left out.

Review of Mary Poppins at Broadway

Mary Poppins the Musical really is “practically perfect in every way”. 5/5 for this captivating masterpiece, brought to life on stage by the same magic that made the film a family favourite.

Mary Poppins is currently showing at the New Amsterdam Theatre in New York, where it is now in its fifth acclaimed year. Millions of theatre goers have already been enchanted and amazing by this incredible show. Tickets can be bought online from www.marypoppins.com or from Broadway box offices.