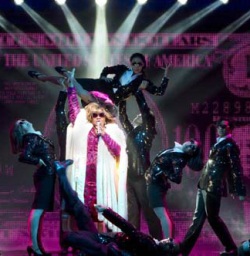 Ghost is a highly entertaining episode, bringing on the feel and experience of live in Manhattan.

Ghost as a film or musical?

Films-turned-musicals are the latest flavours of the season that are blazing up the floors of the theatres. Ghost is one of the most talked about NY theatre shows of recent times, which is an original Broadway production that has given new form to the Academy Award-winning film, Ghost the Musical.

Ghost, a romantic comedy thriller has great history that it can boast of. It is an adaptation of the blockbuster film of the 1990s, Ghost, which won several awards all over the world, and is one of the highest grossing films in the UK. Starring Patrick Swayze, Tony Goldwyn, Demi Moore, and Whoopi Goldberg in the lead roles, the original movie was made under Jerry Zucker’s direction. The film’s screenwriter Bruce Joel Rubin has rewritten the movie into a book “Ghost the Musical”, keeping in mind, the need of stage, as well as the genre of musical theatre.

Giving new life to the memorable block buster, Ghost as a musical is reborn in a new avatar as a musical theatre play, directed by Matthew Warchus, the winner of the prestigious Tony Award. The original scores for the play are given by Dave Stewart, well known for the multi-Grammy Award winning Eurythmics, versus Annie Lennox, and Glen Ballard, who shared the success in Michael Jackson’s Man In The Mirror and Alanis Morissette’s Jagged Little Pill.

A musical set to play in central New York

The play is set in modern day New York City, and explores the unbelievable and unlimited power of love. With a perfect blend of fantasy and romance, the play narrates the story of a couple “Sam” and “Molly,” who are deeply in love with each other. In the cruel hands of destiny, the couple is torn apart on a fateful night, on their way back to the apartment, where they stay. Sam gets murdered, and Molly is devastated and forced to move on alone. Sam, however, gets trapped between the two worlds as a ghost, not able to part ways with Molly, especially when he comes that she is in trouble. Sam then seeks the assistance of Oda Mae Brown, a fraudulent storefront psychic, and tries to interact with Molly hoping to save and protect her.

Characters in the cast

The cast of Ghost offers a blend of musical professionals and stage artists. Ex-Coronation Street actor and singer, Richard Fleeshman gives a splendid performance as Sam, and Broadway actress Caissie Levy joins him as his beloved in the role of Molly. Sharon D. Clarke steals the show, bringing the character of psychic Oda Mae Brown to life on stage; Andrew Langtree, an experienced West End professional plays the role of Sam’s colleague, Carl. The interesting mix of these characters steers the audience effortlessly through the play. Especially, the scenes including Oda Mae Brown and Sam are deep and soul-stirring.

Where on Broadway is Ghost currently shown?

The Lunt-Fontanne Theatre of Broadway is popular to host the shows of Ghost – the musical time and again, and is well applauded for its capability to make the audience experience the power of theatre technology, in this tech-heavy production. The ticket bookings for the show can be done online and there are various competitive quotes for the ticket rates. The show tickets are also clubbed with other offers like pre-theatre dining packages, making it a once-in-a-lifetime experience.

Ghost is a highly entertaining episode, and succeeds to raise spirits, though it lacks some of the qualities attributed to some of the greatest musicals. Amazing sets and video designs effectively bring on the feel and experience of Manhattan life, graphically.

There are many places to buy tickets to Ghost at The Lunt-Fontanne Theatre. The ticket bookings for the show can easily be done online. There are various competitive quotes for the ticket rates. Sites like www.newyork60.com, www.theatermania.com, www.broadwaybox.com and www.viator.com offer cheapest and discounted tickets for this entertaining show. The Ghost show tickets are also clubbed with other offers like pre-theatre dining packages, making it a once-in-a-lifetime experience.

Other theatre shows worth going to while in New York

There are plenty of other spectacular shows to see on Broadway. Read our reviews of Jersey Boys, Wicked, Mary Poppins and Lion King to name a few.